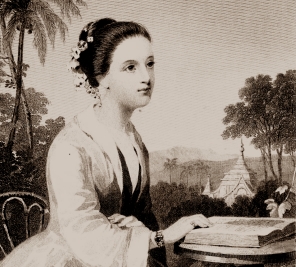 We are told in Proverbs 29:23 – A man’s pride will bring him low, But the humble in spirit will retain honor. This is true, especially in the life of Christian believers who submit to the rule of God. Mrs. Ann Judson was the first wife of the missionary, Adoniram Judson, in Burma (today, Myanmar). The incident below is a recollection of what happened after the imprisonment of Mr. Judson, during the British-Burma war in early 19th century.

The following excerpt comes from Francis Wayland’s “Memoir of the Life and Labors of Adoniram Judson, Vol. 1”. Note that General Archibald Campbell was the highest officer of the British Empire stationed in Burma at the time.

An incident that occurred a few days after the landing of the prisoners is perhaps worthy of notice. General Campbell was to give a dinner to the Burmese commissioners, and he chose to make it an affair of some pomp and magnificence. At a given order, almost as by magic, the camp was turned into a scene of festivity, with such a profusion of gold and crimson, and floating banners, as is thought most pleasing to an oriental eye. When the dinner hour arrived, the company marched in couples, to the music of the band, toward the table, led by the general, who walked alone. As they came opposite the tent with the veranda before it, suddenly the music ceased, the whole procession stood still, and while the wondering Burmans turned their eager eyes in every direction, doubtful as to what would be the next act in the little drama, so curious to them as strangers, the general entered the tent. In a moment he reappeared with a lady on his arm, – no stranger to the conscious commissioners, – whom he led to the table, and seated at his own right hand. The abashed commissioners slid into their seats shrinkingly, where they sat as though transfixed by a mixture of astonishment and fear. “‘I fancy these gentlemen must be old acquaintances of yours, Mrs. Judson,” General Campbell remarked, amused by what he began to suspect, though he did not fully understand it; “and, judging from their appearance, you must have treated them very ill.” Mrs. Judson smiled. The Burmans could not understand the remark, but they evidently considered themselves the subject of it, and their faces were blank with consternation.

“What is the matter with yonder owner of the pointed beard? ” pursued Sir Archibald; “he seems to be seized with an ague fit.” “I do not know,” answered Mrs. Judson, fixing her eyes on the trembler, with perhaps a mischievous enjoyment of his anxiety, “unless his memory may be too busy. He is an old acquaintance of mine, and may probably infer danger to himsell from seeing me under your protection.”

She then proceeded to relate, how, when her husband was suffering from fever, in the stifled air of the inner prison, with five pairs of fetters about his ankles, she had walked several miles to this man’s house to ask a favor. She had left home early in the morning; but was kept waiting so long that it was noonday before she proffered her request, and received a rough refusal. She was turning sorrowfully away, when his attention was attracted by the silk umbrella she carried in her hand, and he instantly seized upon it. It was in vain that she represented the danger of her walking home without it; told him she had brought no money, and could not buy any thing to shelter her from the sun; and begged that, if he took that, he would at least furnish her with a paper one, to protect her from the scorching heat. He laughed, and turning the very suffering that had wasted her into a jest, told her it was only stout people who were in danger of a sunstroke – the sun could not find such as she; and so turned her from the door.

Expressions of indignation burst from the lips of the listening officers; and try to restrain them as they would, indignant glances did somewhat detract from that high tone of courtesy which it is an Englishman’s, and especially an English officer’s, pride to preserve in all matters of hospitality. The poor Burman, conscience-taught, seemed to understand every thing that was passing, and his features were distorted with fear; while his face, from which the perspiration oozed painfully, appeared, through his tawny skin, of a deathly paleness. It was not in a woman’s heart to do other than pity him; and Mrs. Judson remarked softly, in Burmese, that he had nothing to fear, and then repeated the remark to Sir Archibald. The conversation immediately became general, and every means was taken to reassure the timorous guests, but with little success. There sat the lady, whom all but one of them had personally treated with indignity, at the right hand of power, and her husband, just released from his chains, close beyond; and they doubtless felt conscious that if they and their lady wives were in such a position, they would ask the heads of their enemies, and the request would be granted. “I never thought I was over and above vindictive,” remarked Mr. Judson, when he told the story; “but really it was one of the richest scenes I ever beheld.”