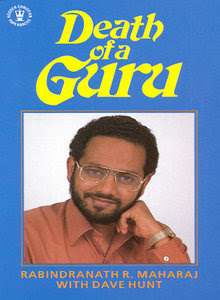 “Death of a Guru” is an autobiography by Rabindranath R. Maharaj (with Dave Hunt), who was descended from a long line of Brahmin priests and trained as a Yogi. The book chronicles his journey from Hinduism into Christianity. Come join us on Sunday mornings, after the morning service and morning tea, for a time to consider the contents of this book with other like-minded adults. There is always time for questions and discussions!

An excerpt from the book’s 14th chapter entitled: “Enlightenment!” follows:

‘Hey, Rabi!’ said Krishna, coming into the kitchen where I had been conversing with one of my younger aunts while she cooked supper. His manner and the look on his face were so different from what I was used to seeing. He seemed pleased to have found me. ‘Did you know that you’ve got to be born again to get into heaven?’ he asked.

I started to say: ‘Of course. I’m going to be born again into a cow. That’s my heaven!’ But Krishna’s earnest expression made me swallow my sarcasm. ‘What makes you say that?’’ I asked skeptically. I noticed that he had a small black book in his hand and was turning the pages as though he were looking for something.

‘It says so in the Bible. Let me show you’. He continued turning the pages slowly, like one exploring unfamiliar territory. ‘Mark …. Luke … John. Here it is, in chapter 3: Listen to this! ‘Jesus answered and said unto him: Verily, verily, I say unto thee, Except a man be born again, he cannot see the kingdom of God’. What do you think of that?’

I didn’t know what to think. Could this be the same Jesus that my mother had told me about long years ago, the same one Molli claimed was the true God who had died for my sins? He must be!

‘Let me see that!’ I said, feeling excited now.

Krishna held the little book out to me so I could read it myself – and as I read I understood at last what I had been struggling to grasp for the three weeks since Molli had talked to me. My world had been falling apart, but now everything seemed to fall into place. To be ‘born again’! Yes, that was what I needed. I knew exactly what Jesus meant. He was talking not about reincarnation but about a spiritual birth that would make Nicodemus into a new person on the inside instead of just giving him a new body.

Now I was really excited. Why had I never understood this before? What good would a thousand physical births do? Reincarnation could give me a new body, but that wasn’t what I needed. I could not imagine a physical birth better than my present one. I had been born into the highest caste, into a wealthy family, the son of a Yogi, given all the advantages of education and religious training, and yet I had failed. It was folly to think that I would improve by coming back into this world in different bodies again and again!