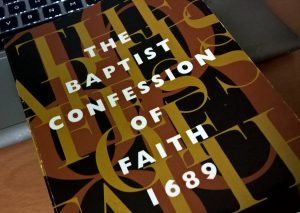 For the first time, we will be considering the “1689 Baptist Confession of Faith” in our bible study. As far as can be ascertained, most churches in Kuantan do not believe in the need to subscribe to a ‘confession’. There are those, like the Presbyterians, who would have heard of the Westminster Confession of Faith, yet do not know the contents of the famed confession.

An excerpt below would outline the usefulness of such “Confessions” – taken from https://1689commentary.org/the-history-and-sources-of-the-16771689-confession/

The word ‘creed’ comes from the Latin word ‘credo,’ which means, I believe.  A creed is a formalized, succinct statement about what its author believes the Bible teaches.  Creeds are used to help remember and teach biblical truth, serving as a standard of doctrine by which to judge error, and are useful in the church for liturgical purposes.

There are those that reject creeds and confessions.  You may hear such a person say something like, “no creed but the Bible.”  While that sounds nice, it is a misnomer; such a statement is, ironically, its own creed of sorts.  It is itself a statement of belief (credo).  It is hardly possible to explain the meaning of the Bible by only citing its exact words.  To explain the Bible’s meaning one must use additional words.  This is essentially what a creed or confession is; it is an interpretive statement and summary about the Bible’s meaning in a formalized manner that is accepted as true by a community of believers.   We do, of course, recognize that creeds and confessions are merely human documents capable of error, and are not to be considered inerrant.

Join us for this year’s bible study in Kuantan, as we seek to consider the 32 topics that address the Christian faith from a Reformed Baptist perspective. Arm ourselves with God-given truth and be thankful that God has always been working to preserve His truth in all generations!